The Board of Supervisors also recognized the Bland County Bearbots for their outstanding competition season in 2018. The Bearbots are two robotics teams at Bland County Elementary School that participate in the FIRST® LEGO® League, one of four (Science, Technology, Engineering, Math) STEM-learning programs from FIRST®, which immerses students in realworld science and technology challenges, where teams ages 9 to 14 are challenged to design their own solution to current scientific problems, then build LEGO®robots that perform autonomous “missions”, while in the process, they developed valuable life skills and discover exciting career possibilities in science and technology. There are 605 robotics competition teams in the Commonwealth of Virginia and Bland County has two teams that competed in 2018 with the Bearbots Blue team being one of two teams from the Abingdon region to qualify for the state competition known as the FIRST® LEGO® League Virginia/DC.

The Bearbots Blue Team consists of members Jacob Myers, Andrew Coleman, Maddie Stultz, Bryson Fanning, Valeska Fulford, and Chase Duncan, and the Orange Team consists of members Addison Myers, Jocelyn Parks, Colton Lambert, Mary Harrison, Riley Gibson, and Ayden Maxwell, and the Bearbots are coached by Ariel Goins and Marilyn Fortner. “When you evaluate what the young people of Bland County have accomplished over the years, along with the high level of community support that they receive, it creates an inspirational atmosphere and it fosters additional achievements,” stated supervisor Karen Hodock. Supervisor Stephen Kelley followed Mrs. Hodock’s, statement with, “Success is not given to anyone, it is obtained through hard work and dedication and that is why it is important, that as a Board, we recognize our youth for their outstanding accomplishments.” 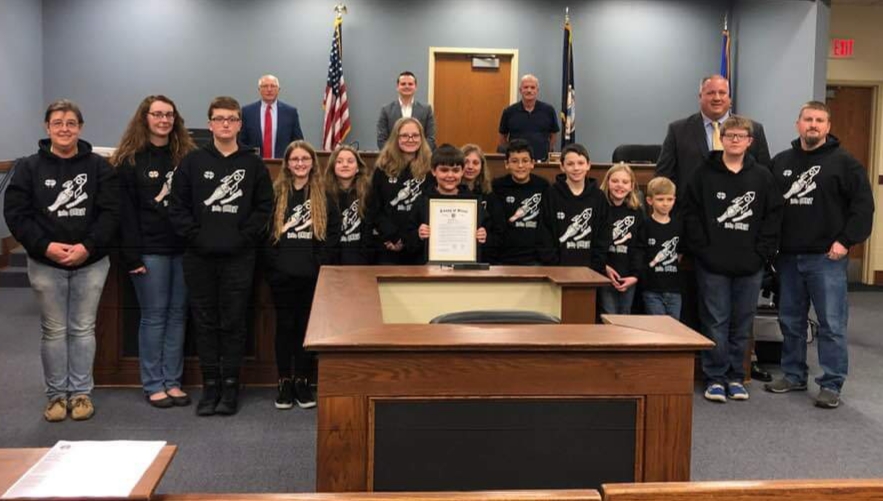